Congratulations to the 2016 U of T Pride and Remembrance Run Team!

Congratulations to all those who completed Saturday’s Pride and Remembrance Run as a member of the U of T Team!  Saturday morning was a fantastic mix of 57 new and familiar faces, beautiful weather, and, as always, a fun and festive atmosphere.  We are thrilled to report that we crushed our ambitious fundraising goal of $10,000 – collectively we raised an amazing $14,145!  In total, this year’s Run raised over $185,000 and the U of T Team played an important role in reaching that number.  After the Run we were honoured in Barbara Hall Park as this year’s 2nd top fundraising team.  A very special congratulations to our top fundraisers this year: Rory McKeown, Kevin Imrie, & Terry Gardiner! 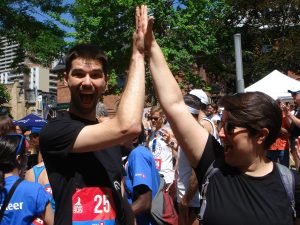 We want to express a huge THANK YOU to Shawn Mitchell, our fearless leader and team captain! With enthusiasm, heart, and a huge smile on his face, Shawn was an incredible leader who led by example and personally raised $2,837.16 for the team, making him our team’s TOP fundraiser!  Congratulations to Team Captain Shawn and to all of the members of the team as well as all of those who supported us.  It was a wonderful morning event and we were thrilled to be a part of it.

This year marked the 21st anniversary of the Pride & Remembrance Run – it is the largest fundraising event held during Toronto’s Pride Week celebrations and since its inception it has raised well over $1,000,000 for local charities that support the LGBTQ+ community.  By running, donating, and fundraising with us you have made an important contribution to the beneficiaries of this year’s Run AND you’ve been wonderful ambassadors for U of T at an important community event. Thank you!

If you would like to stay connected with the LGBTQ+ community at U of T, please consider adding yourself to one or more of the following listservs:

Congratulations again, and we will look forward to running with you again next year!