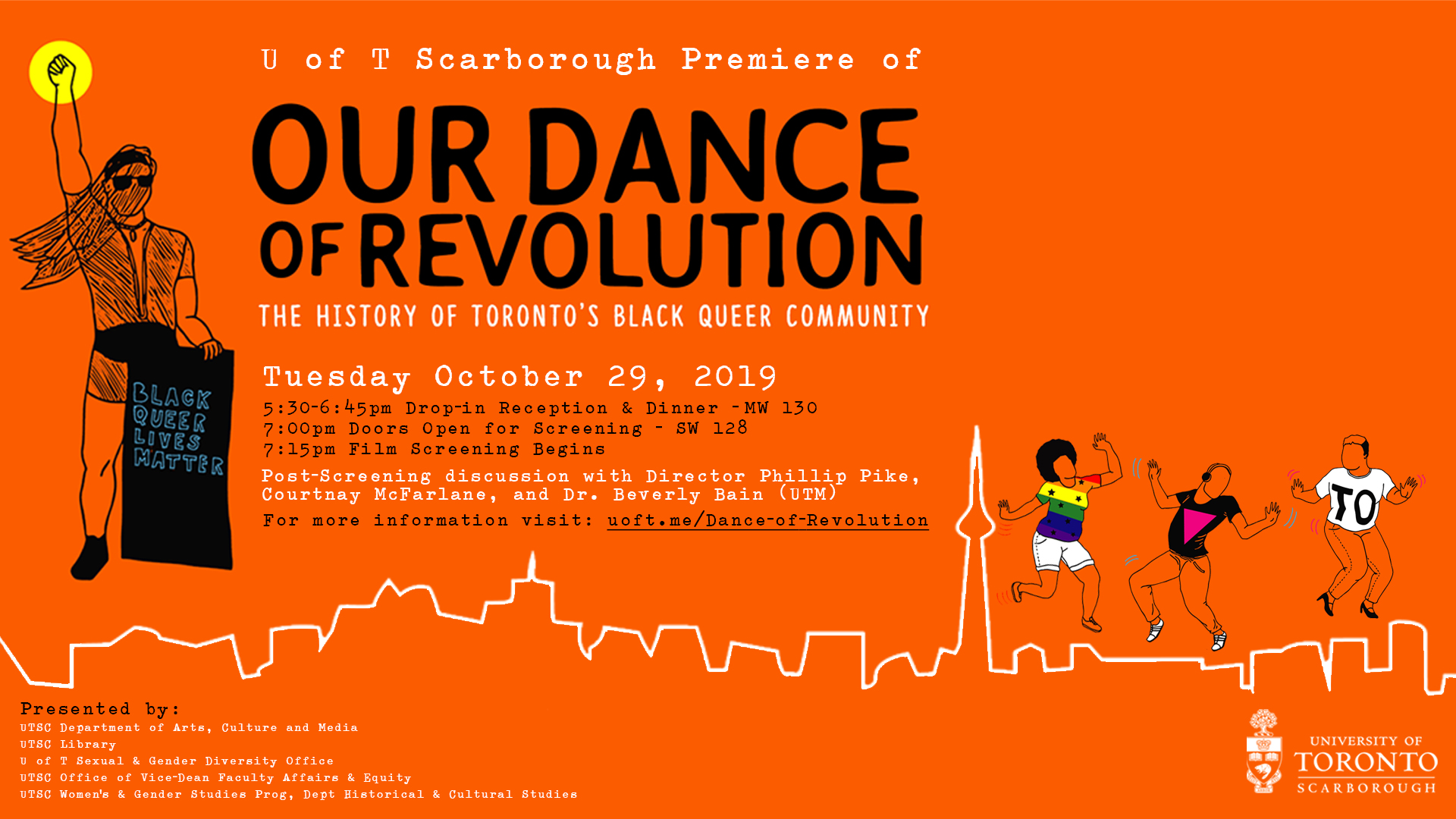 U of T Scarborough Premiere of Our Dance of Revolution: The History of Toronto’s Black Queer Community

Film Description: Our Dance of Revolution tells the story of how Black queer folks in Toronto faced every adversity, from invisibility to police brutality, and rose up to become a vibrant, triple-snap-fierce community. Capturing first-person accounts across a span of four decades, this feature-length documentary is more than a previously untold oral history, more than a reclamation of unsung people and events. Our Dance of Revolution is a human-scale reckoning of how audacious individuals find themselves by finding others, and how they muster the courage, tenacity, and creativity to prevail against the forces of marginalization.

Watch a preview of the film.

> Director Phillip Pike – Phillip Pike is an emerging documentary filmmaker. As a graduate of McGill University’s Faculty of Law, Phillip’s journey of personal and professional discovery has taken him from a career creating change as a community activist and human rights lawyer to a career creating change through storytelling as a documentary filmmaker. He is a graduate of the Documentary Filmmaking Institute, Toronto.

> Courtnay McFarlane – Courtnay McFarlane is a visual artist and poet whose work has been published in several African-Canadian and Queer anthologies. A long-time activist with organzations such as Zami, Black CAP, AYA Men, and Blackness Yes, the organizing committee for Blockorama at Pride. He recently curated Legacies in Motion: Black Queer Toronto Archival Project, that unearthed and celebrated the political and cultural activism of Black LGBTQ communities in Toronto in the 1980’s and 1990’s. In his other life, Courtnay works in the community health sector and is currently Interim Director, Health Promotion and Community Engagement at Parkdale Queen West Community Health Centre.

> Dr. Beverly Bain – Professor Beverly Bain is a Black queer feminist, antiracism, anti-capitalist scholar. She teaches in Women and Gender Studies in the Department of Historical Studies at the University of Toronto Mississauga Campus.  She currently teaches and researches in the area of Caribbean and Black diasporic sexualities, Black and Caribbean queer feminist organizing, sexual assault and violence against women, gender, colonialism, transnationalism and anti-capitalism.